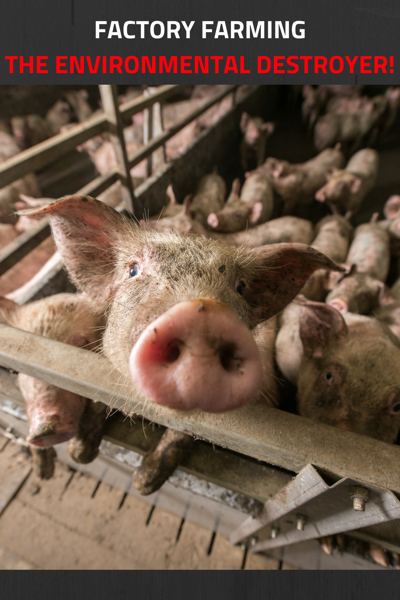 Even as I type this article, vast areas of native forests are being bulldozed into oblivion, destroying all the native flora and fauna that live within them. They are being wiped out in order for humans to sow grain, seed and legume crops to feed livestock? In a nutshell it comes down to this;- Animal Agriculture Is Causing Environmental Disaster .

World Watch, the Sierra Club, the Pew Commission, Greenpeace, and other major environmental watchdogs, have singled out factory farms as among the biggest polluters on the planet!

There is now a scientific consensus, that animal agriculture is the single largest contributor to global warming.

Factory farming outstrips even the transportation industry when it comes to the production of greenhouse gases.

Did you know that around 85% of the worlds soy crops are processed into soy bean oil and soy meal, purely for the purpose of providing feed for livestock?

We are systematically clearing native forests in order to grow huge soy crops to raise livestock, which in turn, when slaughtered, will only end up being able to feed a small portion of the worlds human population. Quite frankly, this process is mad!

It is reported that if all the meat and dairy farmers converted over to growing smaller seed, grain and legume crops, not only could we preserve more forests, but these farmers would be able to produce enough food to directly feed all the starving nations of the world!

According to Jonathan Safran Foer, author of the controversial and widely acclaimed book Eating Meat, in the USA the working conditions on factory farms are so hazardous to ones health, that the only people they can get to work on them are, illegal aliens and poor immigrants.

The conditions are so bad, that the turn over rate of staff typically exceeds 100%!

Factory farming is one of the biggest polluters on the planet!

The huge amount of animal waste;  feces, urine, dead animals, blood, vomit, animal parts, pathogens and dangerous bacteria etc… that ends up accumulating on these farms, can not possibly be all contained into the specially built lagoons. There is just too much!

Once these waste lagoons are filled to capacity, factory farms then release the overflow of their waste onto nearby agricultural fields. They do this under the guise of  the waste being a fertilizer!  They spray liquidised manure into the air, whose pathogens and toxic gases are carried in all directions by the wind, contaminating vast areas.

It is the people who have the misfortune of living in closest proximity to these factory farms, that face the most immediate and serious health risks.

The waste by-products produced from factory farming, are linked to brain damage, miscarriage, birth defects and even depression!

The fecal runoffs from these farms generate dangerously high levels of various heavy metals.  Heavy metals such as Nitrate, which is known to cause Baby Blue Syndrome in humans infants, which can result in death.

One toxic gas released by the lagoons is Hydrogen Sulfide. A gas dangerous even at low levels.  Its effects, which are irreversible, range from sore throats, through to more serious seizures, comas and even death.

Factory Farm waste contains a whole array of  toxic gases and bacteria, such as the deadly E-coli.

Have a read of some of the various health crisis’s caused from factory farming waste here.

A Demand For More Meat Is The Cause

The Western World is eating more animal flesh than it ever has! Much more than even the meat industry recommends is a so-called “healthy portion”.

This demand to feed Westerners massive amounts of meat, has seen factory farms finding ways to produce animals for our consumption as fast, cheaply and efficiently as possible.

Animals are being packed tightly in together, (literally in the thousands) inside closed, putrid, barns.  They have no room to move. Often they are stacked in cages one on top of the other. The excretement from the animals above, fall down covering and infecting the animals below them. The living are forced to stand in their own excretement and also over the bodies of the sick, injured and already dead.

The truth about factory farming is ultimately the following;

By giving up meat and dairy, we are not only saving animals, but doing out part to save the environment from extreme pollution and destruction.

To find out more about why Factory Farmed Meat is such a health hazard for us to consume read here.


Some of my other articles you may find interesting are:

Animal Testing Do Your Part To Stop It

Why Cows Milk Is Bad For Us