You are here: Home / Healthy Kids / The Health Risks of WiFi to Children. Learn How To Minimize Your Child’s Exposure To WiFi. Why France Placed A Ban On WiFi In Childcare. 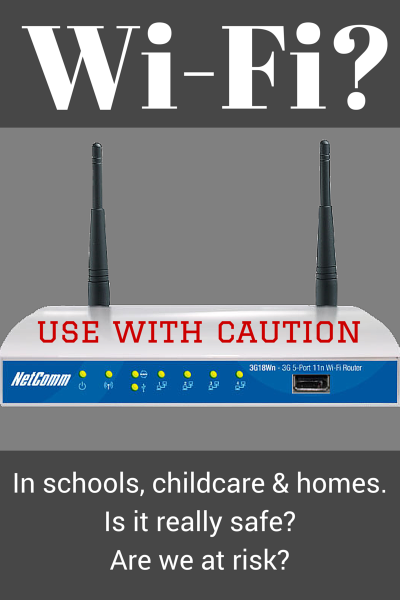 The Health Risks of WiFi to Children

WiFi is used by most of us in our homes, schools and workplaces. WiFi, which produces wireless radiation electromagnetic fields,  is also classed by the WHO (World Health Organization), as a Class B Potential Carcinogen. The biggest concern is the health risks of WiFi to children.

Are we treating WiFi in the same way people in the 1950’s treated cigarettes?

France has listened to this warning and in a brave move on January 29th 2015, the French National Assembly passed a set of new laws aimed at lowering the levels of WiFi exposure for all French citizens and especially for the younger generations.

France has made moves to protect it’s younger generation regardless of whether French citizens oppose, or find this move inconvenient. They are acting on the ‘better safe than sorry’ motto, which is incredible commendable.

Infants and younger childrens bodies are developing at a rapid rate and who knows how WiFi radiation is affecting this process. Not only is there this concern to address, but also we need to address that the amount of EMF exposure to the small body size of a baby or toddler is significantly much greater than that of an older child and adult.

France’s new legislation banning WiFi, is an extensive set of laws, that have been set in place in order to lower its peoples exposure to WiFi significantly. See the entire list here.

France has banned WiFi in places dedicated to where children under 3 years live and sleep, including the home and childcare facilities, such as nursery schools and kindergartens.

The Dangers Of WiFi In Schools

There are many parents who are highly concerned that their children are being exposed constantly, during school hours to WiFi.  France has also stepped up in this area too and has enforced this law, – all primary schools in France, where there are children of 11 years and under, must turn their WiFi routers off when not being used for teaching purposes.

How hard would it be for our schools to insist that the routers are turned off when the teachers are not using the WiFi?

Children can still type away on computers and do educational games that how been downloaded, without the need for constant WiFi connection.

How To Minimize Your Childrens Exposure To WiFi  At Home

There is much debate among scientists about whether WiFi is a serious health threat or not.  I say why wait to find out?  While it is currently only France taking precautionary measures, it is in the best health interests of our children, that we should all encourage our own schools and childcare facilities to follow suit.

When in your own home, how hard is it to have your computers & phone corded up again? In my own house, we have converted the home phones, computer, keyboard and mouse back to the old-fashioned corded connections.  I  use ADSL for my internet connection, but I have asked my server to please ensure that the WiFi is not active.

It may be a little less convenient, in that you can’t walk around with your laptop and phone, but it may be a very small price to pay for our health.


You may also find my articles on reducing EMF exposure helpful.

About EMF Exposure & How To Minimize EMF At Home

Testing For Radiation In Foods Imported From Japan Ceased In Australia as of 23.1.2014