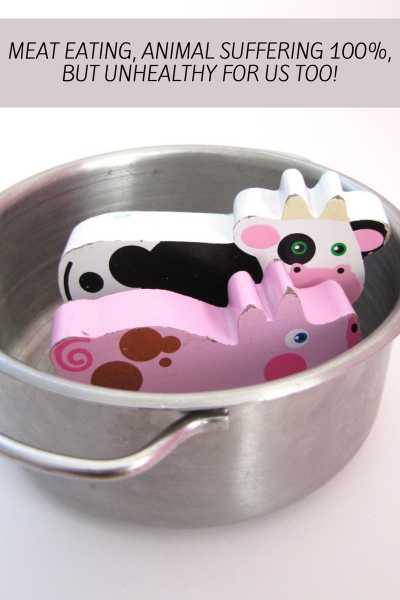 Should humans eat meat? In this article Factory Farmed Meat The Unhealthy Truth I am about to shed some much needed light on how eating factory farmed meat can seriously it can affect our health.

What Can Be Found In Meat Products.

If you knew that every time you bit into a hamburger, fed your kids some chicken nuggets and drumsticks, or indulged in a hearty breakfast of sausage, bacon and eggs, that you and your family, were in-fact ingesting the following;

The Statistics on Meat Eating and Factory Farming

Because of the demand for animal flesh in the Western World, there is a huge amount of Factory Farming!

Did you know that 99% of meat eaten in the USA comes from Factory Farms? Billions of factory farmed animals suffer and die in the thousands each and every day!

The USA is not alone, here in Australia we are not far behind. and even so called ‘free range’ chicken doesn’t mean free ranging at all, but often crammed in barns!  Have a read of this Choice Article on How To Choose Ethical Meat In Your Supermarket.

Most of the meat we eat is produced in factory farms and industrial slaughterhouses, or as they are also referred to – CAFOs (Concentrated Animal Feeding Operations), or IFAP (Industrial Farm Animal Production)it is estimated that around 450 billion land animals are farmed each year. http://www.farmforward.com/farming-forward/factory-farming

The following human illnesses are the result of contamination from direct contact with farmed animals, as well as from eating contaminated meat and dairy products;

*Here is some more information about descriptions of illnesses and diseases contracted from farmed animals and their by-products.

Eating red meat may also increase the risk of certain types of cancers. According to scientific studies if you eat read meat you have a third more of a  risk of developing bowel cancer. http://www.cancerproject.org/survival/cancer_facts/meat.php

So knowing all the above, very well documented, health risks, surely our respective governments would be taking strict measures and closely monitoring the conditions on these farms, thus ensuring that the state of the meat and other animal products  we consume are safe?

Yes there is monitoring to a degree, but it is not nearly effective enough!

Generally there are health inspectors checking things out.  However, these inspectors are meant to be there to  check thoroughly, the state of each living animal, which is an completely impossible feat.  Take for instance huge, factory, poultry farms, where there are tens of thousands of birds cramped into each barn, how is an inspector or two able to check out each bird?

No one person, or not even ten people, could inspect each animal sufficiently!

It is also impossible to inspect every individual cuts of meat for disease and abnormal irregularities.  At a meat processing plant, hundreds of  pieces of meat, continually travel past these inspection officers every single day on automated conveyor belts.

Profit is everything! Our health, the ecological impact factory farming has on the environment, and the animals health, stand for very little.  Companies would rather pay fines and fight against a lawsuit, as opposed to altering their horrific methods. These occasional payouts are but a drop in the ocean of the billions of dollars they generate from their meat sales.

Factory farmed animals are being fed growth hormones. This is done in order to grow them to slaughter size as fast as possible and to produce as much meat as possible, in as short of amount of  time as possible!

These animals are often grotesquely deformed and extremely sick . They are often suffering from incredible stress, their bodies are covered in sores and they have  ammonia burns, from living amongst urine, feces, vomit and blood.

These poor animals are carrying all sorts of diseases.  A large percentage die before they even reach the slaughterhouse.

While one could argue but we have eaten meat for centuries, 100 years ago, meat eating meant having small farms, where animals where given fresh air, natural healthy food, clean water and treated and slaughtered humane. The animals that gave us food where cared for and respected. Nowadays you have a huge multi-billion dollar industry with an incredible amount of money spent of advertising animal product e.g think McDonald’s and KFC.

Why Going Vegan Is The Healthiest Option

Yes I believe a vegan diet is a healthier option, not just for human health, but for the health and ultimately the survival of our fragile planet, plus there is the inarguable, humane side of  saving from unimaginable suffering.

I have found some good and sound evidence to back this argument up, read this in-depth article about the pros of vegetarianism.

This link here gives some great facts from some of the worlds leading organizations such as World Health Organization (WHO), Physicians Committee for Responsible Medicine (PCRM) & the American Dietetic Association (ADA).

People Will Argue That We Need Meat For Protein and Iron.

This is actually complete false! A balanced vegan, or organic vegetarian diet, will more than adequately provide all your protein, iron, calcium and essential fatty acids you need, including omega 3’s!

Balance is of the utmost importance in any diet, whether you are eating animal flesh or you are vegan.

If you don’t eat a healthy, and where possible an organic diet, but you choose to eat a diet that is high in refined sugars, processed foods and bad fats, then you will not have a healthy body regardless of whether you are vegan or a meat eater!

Yes, you absolutely can safely raise your children safely, on a well-balanced, vegetarian diet from the moment they start eating solid foods. See my article Vegetarian Children The Facts. Yes It’s Healthy & Safe and Yes They Can Get Adequate Protein.

If You Still Want To Eat Meat, Choose To Eat Less And Eat Organic

If you still choose to eat meat after reading all the information above, please do so mindfully by following the points outlined below.

But remember you can get all your nutrients met on a vegan or organic vegetarian diet. We need to be aware of what we put in our mouths and not just eat something because it tastes good. See http://www.farmforward.com/farming-forward/food-choices

Consuming factory farmed meat is not only inhumane, but downright dangerous to now only our own health but the health of our entire planet!

*The inspiration behind this article is a powerful book by Jonathan Safran Foer titled EATING ANIMALS. I was inspired to buy his book after seeing him interviewed on the Ellen DeGeneres Show see his interview. Jonathan has taken a very brave stance and written about the meat industry in the USA ( which is unfortunately is a role model for the rest of the world). His book unearths some shocking statistic and facts about the modern meat and poultry industry. It something we all should read.

Some other articles of interest

Vegan Or Organic Does Not Necessarily Mean Cruelty Free