You are here: Home / Lifestyle / Testing For Radiation In Foods Imported From Japan Ceased In Australia as of 23.1.2014 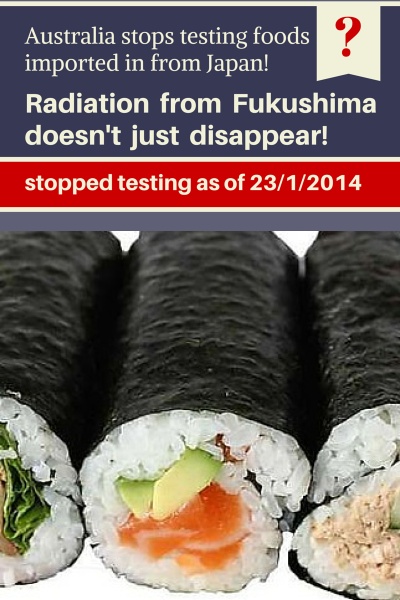 Testing For Radiation In Foods Imported From Japan

I try diligently to give as much factual information about the health concern of radiation contamination of food and raw ingredients in natural products from radiation contamination from both the recent Fukushima Japan incident and the 1986 Chernobyl incident. In regards to Testing For Radiation In Foods Imported From Japan I was informed by ARPANSA that as of January 23rd 2014 the Australian Government will no longer carry out border testing of food from Japan for radionuclides.

It seems that the government bodies around the world test for all sorts of things in food but not for radiation in foods of the most concerning; e.g. seaweed nori sheets from Japan. Here is a letter I sent to ARPANSA and also the letter I sent the the ACO (Australian Certificated Organic) and the EU Certified Organic Boards.  I will post the reply as soon as I get it.

As well as avoiding seaweed sheets be careful about using the vegan versions of gelatin Agar and Agar (I currently still consider the Natali brand the only safe one to use, through Watersteps in Australia ) and Carrageenan as 80% is produced in Korea and the rest mainly in Asia.

According to environmental advocate Dr. Helen Caldicott seaweeds harvested from the Pacific Ocean must carefully screened for the potential presence of carcinogenic radionuclides and the degradation of carrageenan degradation by radiation.

*It has been found in animal studies, that radiation degrades carrageenan and this has been linked to more adverse health outcomes. No studies have yet been conducted to determine whether radiation-exposed Pacific seaweeds pose a danger to human health.

Please read the following correspondences with ARPANSA , the ACO and EU. So far not one of these bodies of protection have been able to show me any clause of protection against radioactive food and natural ingredients??

I was after some factual information regarding the testing for radionuclide’s in foods harvested out of the ocean areas of Japan and Hawaii, namely Seaweed, especially Nori and also Spirulina.
Both these products are consumed in huge amounts here in Australia, especially seaweed Nori sheets used for all Japanese seaweed rolls.

I have been searching all the government sites and it seems here that  both in Australia and overseas neither ARPANSA or the FSANZ, when it came to  Japanese food testing  never tested for example seaweed from the region, only tea, mushrooms and fish!

Also the testing at the border of radionuclide’s in food imported from Japan has ceased by the FSANZ and ARPANSA.

Can you please help me understand how all the seaweed and ocean products from the regions of concern are allowed to be imported into this country and not tested for radiation?

It is extremely concerning, especially as parents nowadays are constantly giving seaweed rolls to young children as a healthy fast-food meal option.

If the seaweed and Spirulina are not regularly been measured for radionuclide’s and the leak from Fukushima is still continuing and is traveling across the Pacific how can the Australian Government deem it safe for human consumption?

I am the owner and editor over in Melbourne Australia of the organic, natural and cruelty-free, free on-line resource site www.livingsafe.com.au

I was looking through the EU Regulation 834/2007 to have a look for any clauses on radiation checks on certified organic food.

My concern is many certified organic foods that we can buy here in Australia are imported.

For instance frozen certified organic vegetables come mainly from the Netherlands and Belgium.

Both these countries were affected by the Chernobyl Disaster as was much of Europe all the way over to the Middle East.

This radiation just like Fukushima does not disappear from the soil, ocean and environment for hundreds of years and I am wondering if certifying organic bodies around the world are regularly checking for radiation e.g. cesium and radioactive iodine etc?

Please if you could let me know any information you may have on this issue?

Thank you for your email.  In regards to your enquiry ACO does recognise JAS certification (Japanese Organic Certification.  ACO also recognises EU 834/2007 standards.

In regards to the your questions about radiation all products sold must comply with all government requirements in relation to food safety first and foremost.  This is where your points about radiation fall out would be covered.

For imported product ACO verifies that the organic status/standard are recognised under an equivalent system.

I hope this is of assistance.

Thank you for replying to my query below.

In regards to organic certifications and recognizing JAS and EU, I understand that the ACO believes this to be reliable but, according with radiation having to comply with all government requirements, there is no legislations that I was able to find either here in Australia or in Europe that covers the testing of radiation contamination and the allowable levels in food and raw ingredients?

It seems they never tested for example seaweed from the region, only tea, mushrooms and fish!

Please if you know of where I can find these references I would much appreciate your help?

ARPANSA has assessed that the risk to Australian consumers from radiation contamination in food imported from Japan is negligible. This is based on results from the Department of Agriculture’s food testing program from March 2011 to January 2014 and the measures put in place by the Japanese government since 2011 to prevent the distribution and sale of contaminated foods. Results of the Japanese food monitoring program can be found on http://www.new-fukushima.jp/monitoring/en/.

While there continues to be reports of releases of radioactive contamination to the ocean in the areas  near the Fukushima Dai-ichi  nuclear power plant, the radiation levels are much lower that at the time of the accident in 2011. Measurements of radioactivity in seawater from the area are reported daily by the Japanese Nuclear Regulation Authority on their website (http://radioactivity.nsr.go.jp/en/). An exclusion zone and fishing ban remains in place near the Fukushima Dai-ichi nuclear power plant.

ARPANSA continues to monitor the situation in Japan and collaborates with Australian Maritime Safety Authority, Customs and Border Protection and other Government Agencies on the transport of goods into Australia to ensure the Australian public is adequately protected. If there are any significant changes to the situation that could impact the health of Australians the ARPANSA website will be updated as required(http://www.arpansa.gov.au/News/MediaReleases/japanadvisory.cfm).

Office of the CEO

In regards to your email below.

She is very worried that ARPANSA are not testing and frankly so are we.

Does ARPANSA test foods coming in from other regions that have been affected by nuclear fallout such as the Ukraine. Here in Australia my own sons goes to a kinder where they regularly feed the children Ukrainian imported Buckwheat for example.

As Dr. Helen Caldicott states radiation is accumulative in the body and can take decades to cause some types of cancers and other illnesses, so shouldn’t the Australian Government be doing their best to protect us by regularly measuring food from affected regions such as Japan, the Pacific Ocean and European Countries affected by Chernobyl?

As human beings we are exposed naturally to a lot of radiation and our bodies have to try and deal with this, but exposing our bodies and especially children’s and infants bodies to excess radiation when it is preventable doesn’t make sense. All that is needed is measuring of imported foods. Surely this isn’t too costly or time consuming an exercise?

Isn’t it better safe than sorry?

Letter to This email address is being protected from spambots. You need JavaScript enabled to view it.”>AGRI-INFO@ec.europa.eu 13/2/2014

We acknowledge receipt of your message and are pleased to inform you, as your question needs consultation with the experts,  that your email has been registered under number Ares(2014)392108 and transferred to the Unit responsible for this matter and they will reply to you directly.