You are here: Home / Healthy Kids / Keeping Our Children Safe Around Mobile Phones 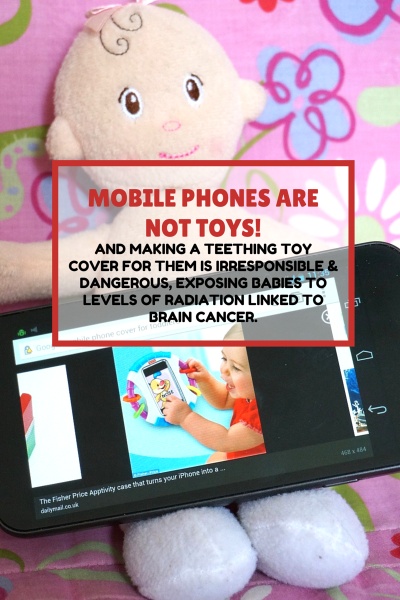 In this article I first address all the recent scientific research linking mobile phone use to brain tumors in children and adults, but especially about children being vulnerable, due to their smaller bodies and still developing organs. Then I will give you some simple precautionary measures on Keeping Our Children Safe Around Mobile Phones and help minimize the amount of radiation  they receive from mobile/cell phones. These mobile phone safety tips will also benefit you.

Important News; The WHO (World Health Organization), on the 2.6.2011, released a statement saying the following;

That they “classified radiofrequency electromagnetic fields as possibly carcinogenic to humans (Group 2B), based on an increased risk for glioma, a malignant type of brain cancer1, associated with wireless phone use.” read entire report here

Astonishingly, unscrupulous, big brand, toy manufactures have designed specialized iPhone covers for babies and toddlers to play with and even teethe on (see picture) and check out this link .

I have to ask whats next… turning mobile phone towers into playground equipment?

These covers are not designed to PROTECT CHILDREN FROM RADIATION.  The are simply designed to protect the cell phone from rough handling from young children. These iPhone child covers are designed so parents can give their babies and young children their mobile phones to play on without the worry of the phone getting broken!

Should Parents Be Taking The Risk Of Exposing Their Children To Mobile-Cell Phone Radiation?

Children using mobile phones absorb as much as double the amount of radiation through their heads as adults.

Walk through a shopping center and you will see mothers holding babies in their arms, obliviously talking away on their mobiles.  Observe school children leaving school for the day and you while see an alarming amount of kids pull phones out of their pockets and bags and start using them.

Maybe there isn’t yet 100% proof that it is dangerous, but  just a few decades back  cigarettes were a measure of how cool you were and not at all unhealthy!  So do we risk our children now, only to find out in 10 years time, we exposed them to dangerously high levels of radiation?

We live in an advanced technological world and as our children reach adulthood they are going to have plenty of mobile phone time, so while they are young and growing, why not do what we can to keep their radiation exposure to a minimum.

It is amazing that parents now use mobile phones as pacifiers to keep children quiet and occupied when out, whatever happened to giving them a book or some crayons and paper? Remember even if your child is playing a game on your mobile, it is still in a transmitting mode, so they are still being exposed to radiation!

Dr Om Ghandi, a leading scientist and professor of electrical engineering at the University of Utah, found that young children under 10 years of age could absorb radiation across their entire brain. He found that more radiation is able to go past the ear and into the head since a child’s ear is thinner and the telephone is closer to the head. “All it takes is two millimeters difference,” Dr Ghandi said. http://www.internationalparentingassociation.org/BrainDevelopment/cellphones.html

Dr. Lennart Hardell, professor of oncology at the University Hospital in Orebro, Sweden, found from examining 15 studies, from six different countries, that children using cell phones before the age of 20, had five times the likelihood of developing gliomas (brain cancers) and acoustic neuromas (tumors of the auditory nerve) than people who start cell phone use after the age of 20.

The incidence of cancer for children under 20 years old using handheld phones is four times more than those over age 20 who use those phones!

The Dangers To Children Of Using Mobile -Cells Phones During Pregnancy

A huge study was undertaken with 13,000 children to determine the effects of cell phone use during pregnancy by their mothers on these children. It was found these pregnant women who used their cell phones just 2 to 3 times a day was enough to significantly raise the chances of their babies developing hyperactivity and difficulties with normal conduct, emotional behaviour and relationships, by the time these children reached school age. See the report- Using A Mobile Phone While Pregnant Can Seriously Damage Your Baby.

The likelihood of these behaviour problems are even greater if the children were allowed to use a mobile phone before the age of seven. This research was conducted at the universities of California, Los Angeles (UCLA) and Aarhus, Denmark

Here are my safety tips for Pregnant Women On Using Mobile Phones.

How To Use A Mobile Phone Safely Around Babies & Children

•    Do not give young children your phone to talk on or play with IT IS NOT A TOY! If you absolutely must give your child your phone to play with at the very least turn it onto FLIGHT MODE, so it is not receiving or transmitting.

•    Do not hold babies and children while talking on the phone, if you have a child on your wait to take the call, or put your child down first.

•    Do not store your mobile phone whilst turned on, in prams, on top of prams or inside baby bags hung on prams ( for your own protection do not store the phone while on directly on your person; e.g in pockets).  Instead while walking around with your baby in a pram, make a point to switch your phone off and if you really need to, you can stop walking occasionally and take a quick minute or two, to turn your phone on and check your messages and then simply switch the phone off before continuing on. It may seem  like a hassle but you are protecting something incredibly important, your child!

•    Think twice before you use your phone, could that call wait till you get home and be made on a land-line and not a DECT hands free home phone which radiates just like a mobile phone and sometimes at an even higher level than a mobile. At home invest in a cheap old-fashioned corded phone! You can chat away on this for hours quite safely while holding or breastfeeding baby.

•    Really try to do your best to avoid mobile phone usage while pregnant and always keep the phone away from your belly, even if it is inside your handbag on your hip.

•    Use hands-free, or safe headsets (research best headsets before buying) and try to hold your phone at a distance away from your body even when talking on hands-free.

•    Minimize the time you speak on your mobile, making it as short as possible, make calls seconds rather than minutes, save the social calls for land-lines.

•    Turn your mobile phone off completely whenever you can when around babies and children.

•    Avoid use in elevators, cars and other confined spaces as the radiation bounces around inside metal.

See also my article – Minimizing EMF Radiation In Your Home


Some other health and safety articles of interest for parents are;

What To Avoid During Pregnancy & What Is Safe

Baby Proofing and Child Proofing Your Home and Garden

Toxic Chemicals and Fire Retardants in Mattresses Making Us Sick