You are here: Home / Lifestyle / The Truth About Apple Cider Vinegar – Does It Really Work? 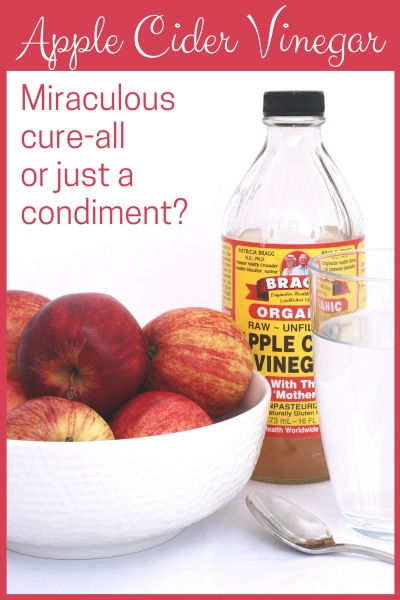 The Truth About Apple Cider Vinegar – Does It Really Work?

People swear by Apple Cider Vinegar (ACV) as a natural health remedy and ‘cure-all’. It has supposedly been used successfully to treat pretty much nearly every health ailment known to man! So lets get down to The Truth About Apple Cider Vinegar – Does It Really Work?

Apple Cider Vinegar is one of the oldest natural health remedies around, with a history of use tracing all the way back to Egyptian urns in 3000 B.C.

ACV is commonly used as an antiseptic, a general health tonic, to treat bacterial and fungal infections and as a food preservative and a condiment.

This old folk remedy of using Apple Cider Vinegar both internally and externally, has in the last couple of decades, gained increasing popularity as a natural treatment for a huge list of health complaints and illnesses.

What Apple Cider Vinegar Is Used For

Is There Any Proof That Apple Cider Vinegar Works?

I started researching into studies on  Apple Cider Vinegar, as I wanted to find out whether ACV really does work as a treatment for all the above?

Did I find proof? Well, on the medical scientific level, there have been a couple promising studies, but these studies are in the infantile stages. However, there is a seriously huge amount of anecdotal evidence from people who have successfully used Apple Cider Vinegar to treat their various ailments.

What I would like to point out at this stage is this, many natural remedies in the past that were dismissed initially by western medicine are now a standard and integral part of western medicine.  One also needs to remember that scientific studies involve a lot of financing and take years to complete and get published. There are countless ingredients out there that have yet to be scientifically studied, but this does not necessarily discount them from being effective.

As mentioned above, as far as Western Medicine goes, the scientific studies on Apple Cider Vinegar are in the very preliminary stages, so you will not find much scientific proof as to what it can treat and what is can’t.

In this PUBMED report here, it states that so far scientific studies have debunked Apple Cider Vinegar as an effective antibacterial, anti-fungal, disinfectant and anti-infective treatment. These studies show that chemical agents are far more effective than ACV.  Maybe so, but it pays to remember that these synthetic drugs and disinfectants also cause serious harm to not only our health, with their plethora of side effects, but also seriously pollute the environment.

The only scientific studies so far, that have shown any promise with Apple Cider Vinegar, is in the treatment of Diabetes.  Taking vinegar has been shown to reduce the glucose response to carbohydrate load in people with diabetes and also healthy adults.  It also shows some promise as a weight control tonic as it produces a temporary feeling of satiety if taken before meals.

Both western and natural health professionals both agree that the Acetic Acid in Apple Cider Vinegar can help the body absorb more nutrients and minerals from food.

On the flip side, there are countless testimonials all over the web praising the incredible healing properties of Apple Cider Vinegar.

So who do we believe?

We do know that Apple Cider Vinegar is alkaline forming when we ingest it.  Many alternative health experts believe that a diet high in acidic foods; e.g. sugars and refined carbohydrates, combined with stress and pollution causes the body’s pH to be out of  whack and can lead to illness, including Candida and Cancer.

It is thought that Cancer and Candida can not survive in an alkaline state, therefore natural health practitioners will advise patients to keep to an alkaline diet and Apple Cider Vinegar is usually included, as is Bi-carb, lemon and green foods.

What Is ‘The Mother’ In Apple Cider Vinegar

Braggs Organic Apple Cider Vinegar is considered the most trusted and pure ACV in the world.

I personally take 2 teaspoons of organic, unpasteurized Apple Cider Vinegar, which contains the all important “mother enzymes”, in filtered warm water, first thing before eating every morning.  Apple Cider Vinegar although highly acidic, is actually alkalizing to the body, but can erode dental enamel, so I advise always swishing your mouth out with fresh water after and also having a little drink of fresh water as a follow-on.

Another way I use ACV, is when I am having digestive issues due to having eaten foods that don’t agree with me, as I am fructose and lactose intolerant.  I can say that is does seem to soothe my digestive system and I have had significantly less indigestion, heart-burn and  gut issues since using it daily over the last couple of months, but has it eliminated all my symptoms? I wish I could say with authority that is has, but so far it just eases my digestive symptoms and I have not noticed any weight-loss, (many people claim excess weight loss, without dieting and exercise, simply by consuming Apple Cider Vinegar).

So the jury is still out, but… it certainly has some proven positive health benefits.

Please remember, even with all-natural remedies, caution still must be taken.

Apple Cider Vinegar is considered quite safe to take for most of us, but it is yet to be studied for safety in pregnancy and breastfeeding and those with diabetes who take it need to be closely monitored as it can alter insulin levels.  Consuming too much apple cider vinegar daily, may possibly lead to low potassium levels and as mentioned above, it is quite acidic, even though it is alkalizing to the human system, so care should be taken with teeth and the lining of the throat.

You may also enjoy my other articles

Green Food Health Benefits – Find Out Which Green Foods We Should All Be Eating & Drinking.

The Truth About Coconut Oil Pulling. Does It Really Work? Learn The Proper Oil Pulling Method.