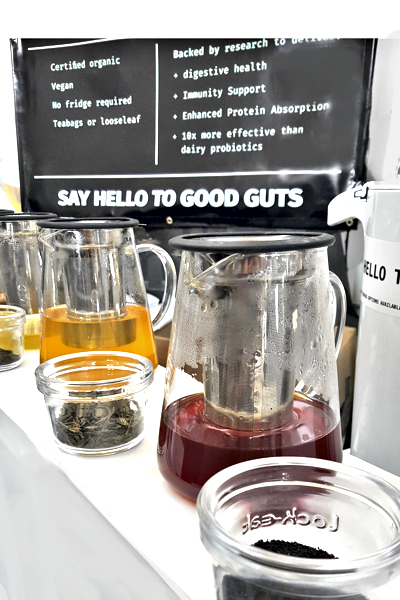 Last month I headed down to The Big Vegan Market, in Melbourne, and one of the stalls I came across was Goodguts Probiotic Organic Teas. I was intrigued by the idea of a probiotic that can stand up to the hot temperature of tea, and spent some time quizzing Claire Starkey, one of the owners of this new product.

It turns out that Claire and I have a whole lot of gut issues in common. Also in common, we each have spent thousands of dollars trying to treat our sensitive, fructose intolerant, guts. Claire has tried pretty much every single probiotic treatment on the global market, and she told me that it was only when she tried some probiotic tea from the USA, that she finally got some much needed relief from her food allergies and intolerances.

As we chatted some more, I ended up telling Claire about LivingSafe and the reasons why I started this blog. I explained that my blog is an information resource site, designed with the purpose of helping people and animals live healthier, safer, humane and informed lives.  On hearing this, Claire immediately armed me with a 7 day supply of one of their Goodguts Organic Probiotic Teas to trial. Claire asked me to let her know how my guts were are the end of a week of daily drinking the tea. She was hopeful that I would see some positive results.

To begin with, I actually came across a bit of problem. The Goodguts tea I chose to trial was a strong, caffeinated tea, and as I don’t drink caffeine, I found that drinking such strong tea, first thing in the morning, on an empty stomach, made me feel a little nauseous and jittery.

I called Claire and told her what was happening and she said that she would send me their Sencha Goodguts. Green Tea, which is much lower in caffeine and also, that maybe I should try having the tea after I have first eaten something.

A few days later the Sencha tea arrived, complete with an extra weeks supply of their Goodguts Peppermint Tea to trial. So now I had a two weeks supply of Probiotic Tea to experiment with.

I thought it would be safest to start off with the Peppermint Tea, as this tea is completely caffeine free. Before I go any further, I have to let you know that, not only does each tea bag contain 1 Billion CFU probiotics per cup (which has been scientifically laboratory tested in the USA to ensure the authenticity of this statement), but it really is the most delicious peppermint tea I have ever had!  I am not sure if it is the probiotics in the tea that make it taste so great, or thatGoodguts. have just sourced an amazing, organic, peppermint tea grower.

After a week on the Peppermint Probiotic Tea, in combination with a low FODMAP vegan diet, I noticed that I was barely getting gassy and bloated anymore.

I am now nearly through the Sencha Tea pack, and I find that so long as I don’t eat high FODMAP foods and drink the tea, my IBS symptoms are greatly reduced.

Like Claire, I have tried many other probiotic, IBS formulations, and usually find they make my gas symptoms  worse rather than better, so I am sold on Goodguts Probiotic Tea.

Goodguts. uses a patented probiotic strain called Bacillus coagulans. This strain of probiotic is incredibly robust and survives boiling, freezing and stomach acids. It works by producing Lactic Acid, which helps support that good bacteria in the gut, and to override the bad bugs.

What I also like about Goodguts. Probiotic Teas is the fact that they don’t require refrigeration. They are organic, ethically produced and vegan friendly, plus you can take them with you while travelling and instead of swallowing a capsule, you get to enjoy a nice hot cup of gut healthy tea.

To find out a lot more and where to get this amazing probiotic tea, visit Goodguts.com.au

Some more interesting articles by LivingSafe