You are here: Home / Lifestyle / Sushi, Seaweed and Fukushima Radiation 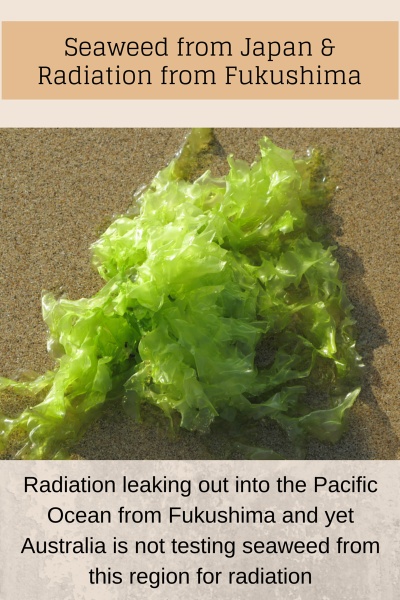 In this article Sushi, Seaweed and Fukushima Radiation , I delve into the risk of eating seaweed and Japanese foods post Fukushima.

Radioactive waste from the Fukushima Nuclear Plant continues to seep out into the Pacific Ocean 5 years on from the biggest nuclear accident the world has known, and yet know one in Australia is measuring imported Japanese foods for radiation.

We wouldn’t eat food harvested from Chernobyl but yet we still all happily eat Japanese foods?  Is this putting out head in the sand because our taste-buds refuse to say no to Japanese food?


Japan has suffered terribly since the Fukushima radiation leak back in March 2011, but it is not only those living in Japan, but also the rest of the world who are at risk.  The western world loves Japanese food and Japanese technology and we seem to be oblivious to the seriousness of radiation contaminated products coming out of Japan.

Seaweed rolls are some of the western worlds all time favourite takeaway food. So should we be concerned ?

Australia stopped testing all Japanese produce for radiation in January 2014 and now relies on the Japanese Government to inform them if there is a problem with higher than acceptable radiation levels.

Seriously,  how can we trust this?  Japan has it’s whole economy at stake since Fukushima, plus you can be pretty certain that plenty of imported Japanese produce slips pasts checks for radiation.

I watched this alarmingly video of a farmer from the Fukushima area speaking to the Japanese Government about how he would not dare eat his own produce because of radiation contamination, yet he is forced to sell it overseas!

Seaweed products that are harvested from the Pacific Ocean area between Japan and the west coasts of  USA, Canada, Hawaii and Mexico are  at risk of having higher than regulated safe levels of radiation. This is due to the fact that the spill of radiation from the Fukushima Plant back in 2011 continued to leak into the Pacific Ocean for many years and it has not spread out towards other countries.

Radiation is not something the dissipates in a few years. It takes 100’s of  years for radiation to dissipate.

According to Greenpeace in this article written back in March 26th 2011, the radiation levels in seaweed around the Fukushima area showed 50 times higher the official limits. The article is a blatant outcry aimed towards the Japanese authorities, for the way they were handling the serious long-term danger of radiation exposure from eating contaminated Nori etc.

Other seaweed products that may be coming from Japan and the Pacific Ocean.

These can be in foods for humans and animals and in cosmetics,  hair care, skin care and cleaning products.

Seaweed Sheets used for  Japanese Sushi Rolls are made from Nori and to date there are only 3 countries in the world producing these and they are Japan, Korea and China.

According to these independent tests done by Enviro Reporter on dried seaweed sheets from Japan, bought in the USA there has indeed been a worrying increase of radiation levels in these products since March 2011, when first tested.

The problem is that it is hard to track down exactly which country the seaweed used to make your sushi roll has actually been harvested from. While it could be harvested from oceans around China, where a lot of seaweed products are made, it  could be from Japan and unless you are willing to invest in your own portable Geiger counter every time you order from your local sushi bar, or consume products containing any other seaweed products; e.g. agar agar,  then you are taking a gamble.

Considering that Japanese Food and Sushi Bars have become so popular in recent years and a sushi roll is considered a very healthy alternative to fast food, it is a very real worry that people all over the world are regularly consuming seaweed products that could be dangerously high in radiation. The trouble with radiation exposure is that it is cumulative so the more we eat potentially high levels of radiated seaweed products, the higher the radiation levels become in our bodies. The risk is magnified for young children, due to their body mass ratio is much smaller than an adults and their organs are still rapidly developing.

Firstly don’t panic, what is done is done and one of the best things you can do if you are concerned that you have been eating radioactive seaweed, is to eat more seaweed that is from a “safe” place. Seaweed actually absorbs radiation in the body, due to the presence of iodine and sodium alginate.

Japan is not the only place seaweed is harvested from, other countries such as Canada, France and China harvest quality seaweed products.

As for eating nori and other Japanese foods using seaweed the jury is still out on the safety of eating these products from sushi bars and restaurants. You can source your own nori sheets and make your own sushi, but again the jury is uncertain, as here is Australian you can buy Gold Mine Nori Sheet and from the Supermarket the BENTO brand and both say made in China, but I would still want to see proof of this and that they are testing each individual batch of seaweed for radiation.  I would not be very confident to buy from Asian Grocery Stores if you can’t be absolutely be assured of where the seaweed was harvested from.

Here is an article by LivingMaxwell.com that sheds light on the various brands of Nori being sold worldwide the the replies on radiation contamination concerns by the manufacturers.


Some other natural health and safety articles you may find interesting are:

Minimizing Radiation Exposure In Your Home

Testing For Radiation In Foods Imported From Japan Ceased In Australia as of 23.1.2014

Why Organic Food Really is Healthier.