You are here: Home / Featured / The Truth About Coconut Oil Pulling. Does It Really Work? Learn The Proper Oil Pulling Method. 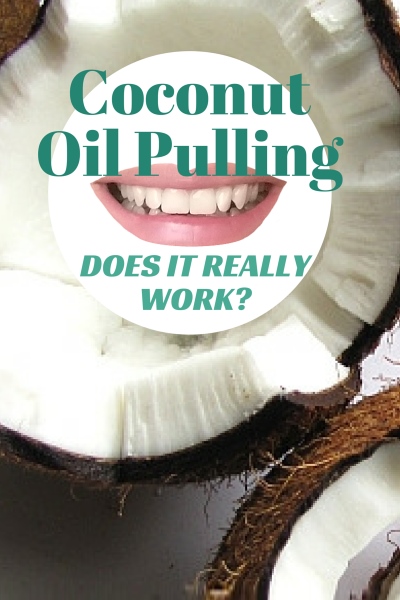 The Truth About Coconut Oil Pulling

Oil pulling, does it really work, or is it just one of the latest in a stream of health kick fads? Well I put myself to the test and set about swishing a tablespoon full of organic, virgin, coconut oil around my mouth every morning for the last 3 weeks in order to let you all know The Truth About Coconut Oil Pulling.

So, my personal verdict…as far as teeth and gum health, I believe yes, oil pulling with coconut oil does seem to whiten and brighten teeth.

I am 44 years old and my teeth had some staining up near the gum line and this has reduced to almost nothing.  My teeth are significantly whiter, but in a natural looking way and not glaringly obviously, as is the outcome of chemical teeth bleaching processes.  So was it the coconut oil itself that made my teeth whiter, or the process of dedicating 20 mins of oil pulling and then decent brushing that made the difference? I don’t really know, but does it really matter? The main thing is my teeth and gums are looking better.

Did my overall health improve from coconut oil pulling during my three week experiment? No it did not.  I feel the same as I did when I started oil pulling.  Do I think the coconut oil pulling was pulling toxins out of my entire body? Nope not really, but on the other hand, due to the antibacterial and antifungal properties of coconut oil, it was more than likely killing off bacteria in my mouth.

There are no major, large scale, western based scientific studies that I could find on the web and believe me I have looked hard.  I was however able to find this small study,PubMed on Oil Pulling, which concludes that oil pulling with sesame oil is effective as an adjacent to oral health.  On the other hand there are plenty of  natural medicine site that sing the praises of the ancient Ayurveda, practice of Oil Pulling. as a cure all for some 30 different diseases. I say show me proof.

More dentists are becoming open minded to the practice of oil pulling, saying it certainly doesn’t seem to be causing harm – have a read.

Oils To Use For Oil Pulling

According to the origins of Oil Pulling , Ayurveda traditional medicines it is cold pressed, pure Sesame Oil that is the king of oils to use for oil pulling. This is due to Sesame Oil have many beneficial health benefits. Pure sunflower oil is also recommended in Ayurveda texts on oil pulling.  Coconut oil for oil pulling is a western alternative medicine adaptation and this is due to virgin coconut oil having so many healthy properties – see Raw Coconut Oil Health Benefits And Uses, plus it tastes so much better and especially first thing in the morning.

The Proper Method Of Oil Pulling

By far the trickiest part is the actual oil pulling method.  Ideally it is done first thing in the morning on an empty stomach, before you eat or drink anything and ideally for 20 solid minutes. Although in ancient Ayurveda texts on oil pulling it was around 3-5 mins.  Not simple, as you are half asleep and stuffing your mouth full of a tablespoon of solidified coconut oil is a little blah!

Once the 20 mins are up you spit the coconut oil from your mouth into the rubbish bin and not down the sink (as this will end up clogging your pipes).

The coconut oil should look creamy white and thin by the time you finish pulling it and the reason you should never swallow the oil, is for safety. The process of pulling oil is designed to entrap bacteria and toxins into the oil and you want these out of your body, not in!

Next you wash out your mouth with water and then follow by brushing your teeth  and your tongue and gums,thoroughly with a natural toothpaste. I use the organic, vegan Riddells Creek Toothpastes.  Should you still floss? Yes you should, especially if you teeth are crowded and close together.

What Do Dentists Say About Oil Pulling

More dentists are becoming open minded to the practice of oil pulling, saying it certainly doesn’t seem to be causing harm – have a read.

One dentist who seems to be a fan of oil pulling is Jessica Emery  founder and owner of  Chigaco’s Sugar Free Dental Loft.  Jessica is a big fan of using coconut oil for oil pulling, rather than sesame or other oils. Jessica does state that coconut oil pulling should not replace regular brushing, flossing and dental visits. Also if you have serious infections in your mouth you should see a professional dentist and not treat them yourself with oil pulling, as if infection enters your blood stream it can become life threatening.

Have a read of Jessica’s view on oil pulling.

As the days went on I became adept at oil pulling while getting the kids ready for school. I would oil pull as I made their breakfast and lunches and the 20 mins went quickly. I also became quite clever as swallowing from the back of my throat, without swallowing any of the oil in my mouth.

On the negative my kids are definitely not fans of their mummy not being able to talk for 20 mins each morning. They said it isn’t nice that I am grunting and pointing at them to hurry up and get dressed with a big mouthful of coconut oil.  They are asking me how much longer will you still be oil pulling mummy? They are not going to like my answer I fear, as yes I will continue on with my coconut oil pulling as I think it is doing my oral health some good.


Articles you may find interesting are;