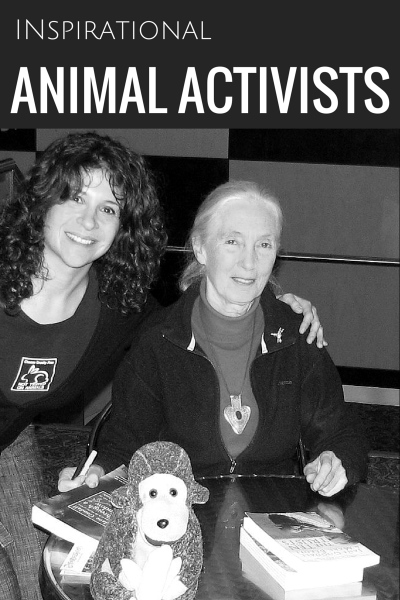 When I started livingsafe, I wanted to not only help educate people on how to live a healthier, safer, lifestyle, but I felt it was incredibly important that I also do what I could to educate others on how to live a cruelty-free, ethical and humane lifestyle as well and  my inspiration to educate about animal welfare, comes from the admiration and respect I have for the following amazing people – Jane Goodall – Peter Singer – Patty Mark: 3 Inspirational Animal Rights Activists

Individuals that have spent literally many decades, selflessly fighting for animal rights, while often putting themselves at great risk.

I also volunteer doing hair and makeup and PR work to assist Liz Jackson and the wonderful team of women behind the Australian non-profit organization Choose Cruelty Free. These women are my mentors and have introduced me to other inspirational animal activists such as; Patty Mark of Animal Liberation Victoria, Lyn White of Animals Australia and Helen Marston of Humane Research Australia.

The three animal activists below I have chosen because they truly are pioneers in animal activism. Have a read and you will see why.

Peter Singer the Australian Pioneer of the Animal Liberation Movement.

Singer is best known for his worldwide, highly acclaimed book, ‘Animal Liberation’, which was originally published back in 1975.

Singer’s book was highly controversial for it’s time. He bravely shone a spotlight on how humans practice what is known as Speciesism; – discriminating against animals due to prejudice beliefs.  Speciesism is the belief that as animals are different from humans, they are inferior to humans and don’t feel and suffer as we do, therefore humans, being superior, have more moral rights.

Those people who believe in speciesism, feel that as they are superior to animals, they can utilize other species, (animals) for their own needs, with blatant disregard to how much pain, suffering, and death they cause.

Singer teaches us that animals feel pain and suffer as greatly as we humans do, therefore it is inhumane and morally wrong of humans to take it upon themselves to decide which animals are dispensable and should suffer; e.g. be experimented on, eaten and worn and abused for human gain or enjoyment.

Singer message is that all animals, no matter what species, have a right to live a life free from pain and suffering at the hands of humans.

Singer continues to be one of the very strongest voices for animal rights around the world. He continually campaigns, lectures and writes as a voice for the animals. Singer has been named by by the Gottlieb Duttweiler Institute as the world’s third most influential contemporary thinker.

Peter Singer not only fights for the rights of animals, but he also has set up The Life You Can Save, to fight extreme poverty in the world.

I was fortunate to meet Jane Goodall back in 2006, here in Melbourne at the premier of her IMAX movie. As you can see from the photo getting to shake the hand of this truly remarkable, humble and dignified women, has been one of the highlights of my life.

Goodall is considered the foremost expert on Chimpanzees in the world, but it is her conservation and animal welfare work that she is so highly admired and respected for.

Through the  Jane Goodall Institute and her Roots & Shoots programs, Goodall is teaching future generations how to protect animals and the environment. Roots & Shoots now has 10,000 groups running in over 100 countries.

Even today at the age of 81 Jane tirelessly travel the world. She spends, on average, 300 days of each year, traveling and speaking to huge and small audiences, spreading her message of the importance of conserving our fragile environment and protecting animals. Most importantly, she imparts to each of her audiences, a sense of empowerment that we all have the ability to change things for the better for the future.

Jane Goodall has written countless books, many I have personally read, but her 3 must reads are, A Reason For Hope, Seeds Of Hope & Hope For Animals and Their World- available here.

Patty Mark started up Animal Liberation Victoria 1978 and was one of the pioneers of ‘open rescue’ animal operations. Since then Mark, a now 66 year old grandmother has maintained vigilant in her fight to save animals.

Patty Mark has seen the inside of a jail cell numerous times, all  because she steps up with her team and does what most of us would never do, simply because we are not brave enough. Marks and her team of volunteers, knowingly break the laws of trespassing in order to rescue sick, dying and abused animals.

It is because of Mark and her teams courageous efforts, that we now know about and have seen documented evidence of the horror that animals face inside the monstrous business of factory farming, puppy mills and more. Thanks to Mark, we are slowly seeing laws enforced to stop puppy mills and battery egg farms.

Earlier this year, Mark was arrested on charges of burglary, theft and criminal damages and faces another stint in jail, all because she and some of the Animal Liberation volunteers, trespassed in an attempt to expose the horrific conditions the hens were living and dying in at Wagner’s Poultry Farm in Victoria. Marks and her team actually rescued some of the extremely sick birds in order to provide them with emergency veterinarian treatment in the hope of being able to save their lives. See the story here and here.

I know Patty and spoke with her some years back about what happens when she is sent to jail?  I was astounded when she answered my question about whether she was was put in jail with murderers and other dangerous criminals, with a yes, she was!

What sort of world are we living in, when a women with a heart full of kindness and empathy is thrown in jail with murderers?


Articles you may find interesting are;

Animal Testing Do Your Part To Stop It

The Benefits Of Fostering Animals

Cruelty Free Cosmetics, How To Be Sure Your Cosmetics Truly Are Not Being Tested On Animals.