You are here: Home / Pets / Pet Food Companies Poisoning Our Dogs and Cats 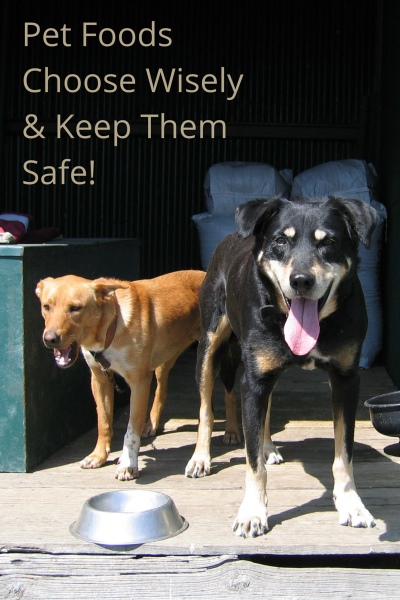 If you knew what goes into the average tin of cat or dog food, or that bag of dry dog or cat food you would be horrified! There has been many news reports on Pet Food Companies Poisoning Our Dogs and Cats and plenty of alerts and recalls.

Animal by-products used for pet foods for dogs and cats, are made up of all manner of ‘rendered’ animal parts, including the following; feathers, feet, fur, bones, heads, organs, unborn fetuses and even diseased animals that were considered unfit for human consumption.

These unfit for human consumption, animal by-products, also contain antibiotic and growth hormones, which are commonly used in the rearing of non-organic cattle and poultry.

The final stages of manufacturing many pet foods, especially dog and cat food, is to season it with a wide array of synthetic chemical additives, preservatives and emulsifiers. These are used to make the food into its’ processed state. It also included adding in the necessary flavour enhancers, in order to entice your dogs and cats to willingly eat the food. It is no wonder our pets are getting sick.

The Problems Of Rendering Pet Food.

Many brands of cheaper pet foods can contain animal by-products from slaughterhouses and other such places, which are collected then rendered, which means, all the parts are heaped together and boiled at extremely high temperatures in a vat.

The extreme, prolonged heat damages the proteins and destroys the enzymes that carnivores such as dogs and cats need for good health.

Veterinarian Dr. Karen Becker has written this insightful article  – it is information that all pet owners should read.

Dogs Are Predominately Carnivores – A Diet High In Carbs Is Not Healthy For Dogs.

According to anatomy experts, dogs are ‘true’ carnivores, although they are also able to eat as an omnivore.

Dogs are not genetically equipped like  humans and other herbivores and omnivores. They are not able to digest large loads of carbohydrates. Dogs are able to process some grains and vegetables, but commercial pet foods are often bulked up with cheaper carbs such as corn products, (which are also often genetically modified) and this puts a huge strain on the dogs internal organs.

A carnivores pancreas isn’t designed to process a diet rich in carbs and this leads to a whole host of illnesses and inflammatory diseases, gut problems and obesity.

As mentioned above, cheap commercial pet food would be quite unpalatable to dogs, if the ingenious pet food manufacturers hadn’t designed a specialized ‘flavoured fat spray’ that makes the food taste great. Think of it as MSG for pets!

Recalls are also very common in the pet food industry and thousands upon thousands of pets have sadly died, or become very ill from contaminated pet food.

One courageous women, Rebecca Hosking in the U.K, set out to investigate into what made her beloved dog so critically ill and what she unearthed led back to his food.  A high quality, dry kibble that was actually slowly poisoning him. Read her report here in the U.K Daily Mail.

Our family personally experienced a similar thing, when our beloved family dog Jesse (now deceased), was about  12 years old and was put on some expensive dry dog food to help combat his problem with reoccurring bladder stones. Slowly, Jesse’s hair started to fall out, he lost loads of weight and the skin on his stomach area was bright red, inflamed and ulcerated.  We took him to vet after vet, including skin specialists and not one made the connection to his food.  We were told it was probably cancer but they couldn’t find the cause.  It wasn’t till we went to a vet who was recommended to us as an excellent diagnostician,  who asked what food was Jesse on and when we told him, he immediately said stop it at once.  We did and low and behold Jesse made a quick and full recovery and lived to be 16.5 years old.

What is even more shocking is that the so-called superior, high quality pet food brands, are also know to conduct horrific tests on the very animals they are manufacturing food for e.g. dogs and cats.  Read the story of IAMS pet food testing from PETA.

To find out what are healthier and safer diets to feed your dogs and cats, read

What To Never Feed Your Cat & The Benefits Of Feeding Your Cat A Healthy Natural Diet.

What Never To Feed Your Dog & The Benefits Of Feeding Your Dog A Natural, Healthy Diet